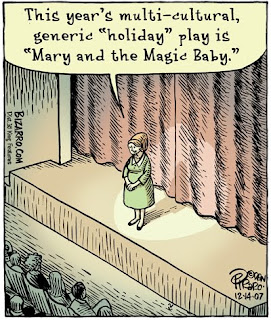 Are Christians are intolerant? Are they narrow-minded. Do they have any good reason to claim that someone else holds to erroneous beliefs? Should Christians be "tolerant" of other people’s views?

“Tolerance”, part of the political correctness campaign, has become a buzzword in American society and to be honest, I’m bored with it. The concept is applied to everyday conversation, politics, and religion where Christianity is one of the biggest targets of being tagged as intolerant. Those that point and scream "intolerant!" come off as sensitive, intelligent, and open minded, but what are we, as Christians, supposed to say or do? Are Christians really intolerant?

The truth is, the whole idea of “tolerance” is completely grounded on a logical fallacy and it is very frustrating to see ideas like this get as far as they do because it demonstrates how much people do not think about ideas before they adopt them. Furthermore, tolerance is just an attempt to escape the reality of truth and the absolute nature of it. Those who spout tolerance hate that Christianity claims to be absolutely true since that shows the supposed arrogance behind its claims. They would rather Christians “tolerate” every existing view and say that everybody can be right in what they believe.

The first of the few problems with the whole idea of tolerance/intolerance, as it is defined in today’s culture, is that the idea itself is self-defeating. (A self-defeating statement/idea is one that does not meet its own requirements.) Tolerance/intolerance requires that all views be accepted as equally valid. If this is truly the case, then even the view of “intolerance” should be accepted, but as we all know it is not accepted and that is the reason the whole “tolerance” movement began. As tolerance is currently defined, all views are tolerated except the view of intolerance, and thus it is self-defeating.

Secondly, the idea of tolerance/intolerance also ignores the definition and nature of truth. Truth by definition is what corresponds to reality. It describes reality as it really is. Moreover, in reality two contradictory things or ideas cannot both be true at the same time and in the same sense. If there are two contradictory things or ideas then one of them must be right and one must be wrong. It is possible that they are both wrong according to the whole of reality, but when they are just compared to each other error is still involved. Thus, truth by nature is narrow and intolerant of error.

If truth is intolerant of error then the whole idea of tolerance/intolerance falls apart, unless one wants to posit that there is no such thing as truth at all and that is exactly what birthed the idea tolerance/intolerance in the first place. If that is the case, then all truth claims are relative and "tolerance" is just relativism in disguise. But relativism is also self-defeating by nature since it claims that relativism is true and everything else is false. If, on the other hand, it is claimed that relativism itself is relative and does not claim to be a true idea, then there is no reason to even pay attention or consider the idea of relativism as having any worth or validity.

The third problem with tolerance/intolerance is that it misunderstands the very definition of the word “tolerance”. Tolerance, according to a simple dictionary definition, is the fair, objective, and permissive attitude toward opinions and practices that differ from one’s own. Where in this definition does it say that every idea should be considered equally valid and true and that no one should tell anyone else their idea is false? Since when has expressing or endorsing a particular view become a sign of intolerance?

The problem is that “permissive attitude” has come to mean “personal offense” and so when someone does not like or favor a particular view they become “offended” and so that other person is labeled intolerant. Simply expressing one’s view does not mean that person is not permitting alternative views to be expressed. The correct view of “permissive attitude” is that everyone has the freedom to express their views, even if they are contrary to other views and even if others personally disagree with them. Furthermore, the idea of being afraid to offend someone with our ideas blurs the line between emotion and truth and completely ignores the distinction between ideas and the people that express them.

The fourth problem with tolerance/intolerance is that everyone is equally exclusive with what they believe, which is contrary to the whole idea behind tolerance/intolerance. Those who label others as intolerant pride themselves to be open, progressive, and of course, “tolerant.” According to the nature of truth, if one individual or group claims to be true or correct in their views, then by definition, all other contrary individuals and groups are false. For example, when one claims that Atheism is true, then immediately what is implied is that all non-Atheism is false.

Also, when one claims that tolerance is the right view, then it is immediately implied that those who disagree with tolerance hold the wrong view. Contradictory views, by nature, are never open to each other and so they must be equally exclusive. Anyone who is "tolerant" and claims their belief as the right one is as equally exclusive as the everyday Christian who claims their belief as the right one. So when a Christian claims their beliefs are true, it is not out of arrogance but comes from the very definition of what truth is. Again, claiming a belief as right and true logically excludes all other contrary beliefs as wrong and false, so those that claim to be progressive or "tolerant" are just as exclusive and intolerant as everyone else.

Lastly, think for a minute about the possible ramifications of accepting everybody's view as equally valid and true – where everybody is allowed to be right. Contradictions become possible, no one gets offended, and everyone gets along? I don't think so.
Posted by vozz at 3:55 PM No comments: 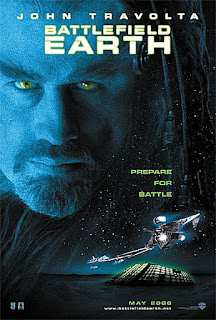 Since Battlefield Earth was released in 2000, I realize that I'm 9 years late on naming it "a new standard", but I have no other choice since I finally watched it in October of 2009.

Here are at least 7 reasons why I loved Battlefield Earth:

1) I watched big name actors humiliate themselves with terrible scripting and terrible acting.
2) The 'made-for-tv-movie' special effects.
3) I watched as Battlefield Earth violated all rules of story and plot.
4) I picked up the idea that knowledge, self-help, and autonomy (an abandonment of 'primitive' belief in a deity or deities) must be the philosophical underpinnings of Scientology.
5) The costumes were laughable, and it was amusing watching the actors clumsily trying to walk around in over sized boots.
6) Knowing how excited John Travolta was to make this movie due to his personal beliefs in Scientology and his love for L. Ron Hubbard, and to see how bad the movie is makes it that much more enjoyable.
7) And finally...I watched Battlefield Earth become the new standard for bad movie making; an excellent example of what not to do for film students.

Overall, Battlefield Earth is absolutely awful. But...it's an epic debacle that is so bad that it's actually enjoyable. So even though it violates every rule of good movie making, do yourself a favor and watch it. You'll have a good time.

If you want an honest, but humorous professional review, read this by Roger Ebert:
http://rogerebert.suntimes.com/apps/pbcs.dll/article?AID=/20000512/REVIEWS/5120301

Here is how Ebert begins his review of Battlefield Earth: "Battlefield Earth is like taking a bus trip with someone who has needed a bath for a long time. It's not merely bad; it's unpleasant in a hostile way."
Posted by vozz at 7:58 PM 1 comment: