The Ascension and Return of Christ 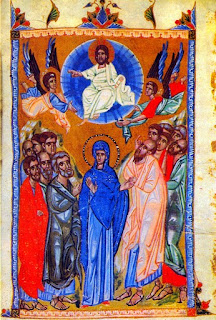 "And when he had said this, as they were looking on, he was lifted up, and a cloud took him out of their sight. And while they were gazing into heaven as he went, behold, two men stood by them in white robes, and said, "Men of Galilee, why do you stand looking into heaven? This Jesus, who was taken up from you into heaven, will come in the same way as you saw him go into heaven." – Acts 1:9-11

…didn’t Christ ascend from/within the midst of His people?

Yes, but what significance does this have in contrast to Christ returning from the clouds? Perhaps we can understand this liturgically. During every Badarak (Divine Liturgy), the promise of Christ’s return is manifested. That is, just as Christ left, He returns to us in the Badarak, within the midst of His people, as a foretaste of what is to come, and what is already here. Eternal life -- present now, and in the future when we live with Him in His presence forever.

Here is further insight from an Eastern Orthodox priest, blogger, and author...

"…the classical Orthodox understanding of the relation between earth and heaven; past, present and future; and the mystery of the Kingdom of God at work in the world. His universe is distinctly “one-storey.” This understanding also undergirds the Orthodox understanding of eschatology (the study of the “last things”). St. John Chrysostom, in his eucharistic prayer, gives thanks for the Second Coming of Christ in the past tense – not that he is saying that the Second Coming has already occurred in history – but that the Eucharistic celebration stands within the Kingdom of God, such that the Second Coming can be described in the past tense. The Eucharist is the “Marriage Feast of the Lamb,” the “Banquet at the End of the Age." – Fr. Stephen Freeman

This reality can also be understood through the art or icons of the Orthodox Church, such as the Armenian Orthodox image above (click image to enlarge), or this Greek Orthodox icon. "Icons of the Ascension represent Christ in such a way that one cannot tell whether He is going to heaven or coming again to earth. This captures the profound truth that we are already living under His reign while awaiting His return. Thus, the icons shows Christ being taken up, coming again in like manner, and yet continually present."
– Orthodox Study Bible (Acts 1: 9-11)


I would like to thank Rev. Todd A. Zielinski, one of my spiritual directors, for introducing me to this theological reality.
Posted by vozz at 3:15 PM No comments: