Faith and the Armenian Genocide 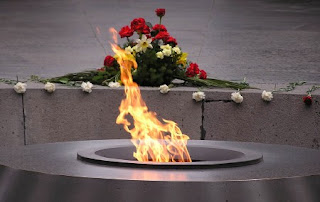 Faith can be a very illusive concept due to its seeming intangibility. It can be very difficult to define, even when Scripture references it numerous times. Faith can even be doubted, taken for granted, and trivialized, even though it is the theme throughout Scripture from Genesis to Revelation. None of this means we should avoid the topic, so what follows is a reflection on faith and its importance in our lives as Christians.

Faith seems to entail (but is not limited to) the following elements: trust, belief, and response. These three elements, although expressed and manifested in various ecclesiological expressions and traditions, are ultimately directed toward and placed in a Person; the Person of Jesus Christ.

Our faith serves as the foundation or grounding, where our trust in Christ as the Messiah takes root. We know that without faith, we cannot grow, mature, be transformed into the image of Christ, or obtain union with Him. Both the ethos and the telos of Christianity require faith, and require it to be placed in Jesus Christ.

Our faith defines who we are as Christians; as His disciples. John 1:12 says, "But to all who received him, who believed in his name, he gave power to become children of God." Ephesians 1:13 reads, "In him you also, who have heard the word of truth, the gospel of your salvation, and have believed in him, were sealed with the promised Holy Spirit."

Our faith defines what we do in His name, so that when we are redeemed, our works are redeemed as well. Our works follow what we believe and thus, are evidence of our faith. Ephesians 2:8-10 reads, "For by grace you have been saved through faith; and this is not your own doing, it is the gift of God --not because of works, lest any man should boast. For we are his workmanship, created in Christ Jesus for good works, which God prepared beforehand, that we should walk in them." Also, James 2:14, 17 reads, "What does it profit, my brethren, if a man says he has faith but has not works? Can his faith save him?...So faith by itself, if it has no works, is dead." Without faith, our works become at the very least self-gratifying or self-glorifying. Only when our works are grounded in Christ do they have meaning and significance to the Church, the world, and the Kingdom.

Our faith is communal. Without the faith of others, we the faithful cannot survive. Although faith does apply to the individual before God, it is not merely something between one individual and 'his' God. Faith is not independent. The Church is the Body of Christ, and His entire Body is His instrument, and it is the Church's communal faith that makes up the people of God. I Corinthians 12:12-14 reads, "For just as the body is one and has many members, and all the members of the body, though many, are one body, so it is with Christ. For by one Spirit we were all baptized into one body -- Jews or Greeks, slaves or free -- and all were made to drink of one Spirit. For the body does not consist of one member but of many." Again, from Ephesians 2 (which was written to the Church as a whole), "For by grace you have been saved through faith...For we are his workmanship..."

Today is April 24th, which marks the (95th) anniversary of the Armenian Genocide which took place in 1915. This post is written in memory of the faithful Armenians who suffered and died for their Christian faith and heritage no matter the cost. They are a true example of a living faith, and an inspiration to not only Armenian Christians, but to all Christians who believe, trust, and respond to the Person of Jesus Christ. They carried the cross of Christ, they suffered for His name, and they literally lost their lives for what they believed. May the fallen faithful Armenians never be forgotten, and may the light of their faith continue to shine.

Then Jesus told his disciples, "If any man would come after me, let him deny himself and take up his cross and follow me. For whoever would save his life will lose it, and whoever loses his life for my sake will find it. For what will it profit a man, if he gains the whole world and forfeits his life? Or what shall a man give in return for his life?" - Matthew 16:24-26
Posted by vozz at 11:21 PM No comments: