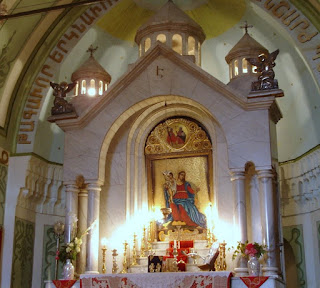 If you walk into any given Armenian Orthodox Church, you may notice something over the altar, or at least most of them. You may either see the single letter 'Eh' (Է) directly at the top, such as the picture to the left demonstrates, or you may see the words 'Asdvadz Ser Eh' (in Armenian letters) with the English translation 'God Is Love' following it. In the case of the latter, the letter 'Eh' (Է) is still directly above the altar.
What is so special about the letter 'Eh' (Է) that it deserves such a prominent place over the church altar? First, let's look at its meaning. In the phrase 'God is Love', the word for is is 'eh', thus, 'Asdvadz Ser Eh' (transliteration: 'God Love Is'). So, the letter/word 'Eh' (Է) literally means 'is' or 'he is', which , to those familiar with the Old Testament, may sound like a reference to God Himself.
In Exodus chapter 3, the prophet Moses encountered God in the burning bush. As God was instructing Moses to deliver His people from Egypt, Moses asked, "If I come to the Israelites and say to them, 'The God of your ancestors has sent me to you,' and they ask me, 'What is his name?' what shall I say to them?" God said to Moses, "I am who I am." He said further, "Thus you shall say to the Israelites, 'I am has sent me to you.'
God told Moses that His name is 'I am', or technically 'Is', or 'He Who Is'. Thus, God is a being who just IS, and it is only the eternal God who can call Himself by this name. In Armenian, it is the letter/word 'Eh' (Է) that serves as the name for 'I am' or 'he is', and just as Moses realized the 'Eh' (Է) to be dwelling in the burning bush, so too does the Armenian Church realize that God (Eh) dwells at the church altar.
Furthermore, 'Eh' (Է), when pronounced, makes the sound of a breath, and so the idea of God being the breath of life is attached to this letter. Also, the letter 'Eh' (Է) happens to be the 7th letter of the Armenian alphabet. Symbolically, 7 is known as the number of perfection, or completion. Throughout the Bible, the number 7 is attributed to several acts of God, and to God Himself, so the letter 'Eh' (Է) takes on even further significance.

Thus, for the Armenian Church, the letter 'Eh' (Է) and its meaning is considered to be Holy. It is not only symbolic, but 'Eh' (Է) is the name of God.
Posted by vozz at 10:17 AM No comments: