Why Does the Armenian Church Refer to Easter as 'Zadeeg'? «Զատիկ» 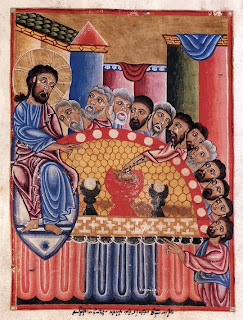 Although we commonly use the word Easter in the Armenian Church, why do we officially refer to the ‘Feast of the Resurrection of Jesus Christ’ as Zadeeg «Զատիկ»?

Originally, the word zadeeg «զատիկ» meant ‘sacrifice’, referring to the Passover sacrifice, where an animal was set aside as an offering to the Lord. This meaning is derived from the verb zadel «զատել» which means to put aside, separate, or set apart. Today, the word Zadeeg «Զատիկ» is simply translated as ‘Passover’, so if one were to read the Armenian translation of the Bible, any time word Passover is used, it would read Zadeeg «Զատիկ», but the idea of setting something aside or apart remains.

“Christ, the spotless Lamb of God is offered in sacrifice of praise”
~ Holy Badarak of the Armenian Orthodox Church
Posted by vozz at 9:06 PM No comments: