St. Ephrem the Syrian - The Robe of Glory 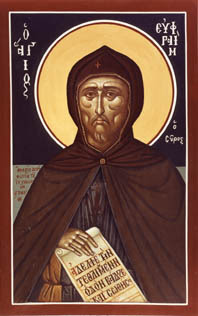 In the introduction to Hymns on Paradise, by St. Ephrem the Syrian, Sebastian Brock explains that typical to almost all early Christian writers, including St. Ephrem, Melito of Sardis, and Jacob of Serugh, is the employment of clothing imagery. Ideas such as God ‘putting on’ names in the Scriptures, Christ ‘putting on’ the body at the Incarnation, and Christ ‘putting on’ our weakness fall within the use of this metaphor.1

Clothing imagery is not original to St. Ephrem, as he is most likely developing imagery already found within the Old and New Testaments, and especially in the writings of St. Paul. In Romans 13:14, we read, “But put on the Lord Jesus Christ, and make no provision for the flesh, to gratify its desires.” Also, in Galatians 3:27 we read, “For as many of you as were baptized into Christ have put on Christ”.2

The originality that does belong to St. Ephrem is how he applies this metaphor to the whole of salvation history, and how the ‘Robe of Glory’ is a common thread interwoven throughout God’s cosmic plan. The ‘Robe of Glory’ image does not only appear in St. Ephrem’s Hymns on Paradise, thus the following can be thought of as an overall concept found throughout many of his writings.3

Again, in His divine Providence, God has interwoven the idea of the ‘Robe of Glory’ throughout His cosmic plan of redemption. Brock outlines this in four main episodes which make up this cosmic drama:
Brock goes on to explain that the “Robe of Glory provides a thread which links up between the primordial and the eschatological Paradise”, and this context is intended to bring to mind the entire span of salvation history5. In one of his Epiphany hymns, St. Ephrem makes clear that Christian baptism was the means provided by God in order for the baptized to recover the lost robe when he writes,

Thus, as one considers the ‘Robe of Glory’ imagery, one can see the place of each individual Christian’s baptism within the divine economy as a whole, and the hope this provides for the believer and the Church.